A conservative gain in a small Kentucky county this year could further narrow one of the remaining paths for civil rights litigation in the state. 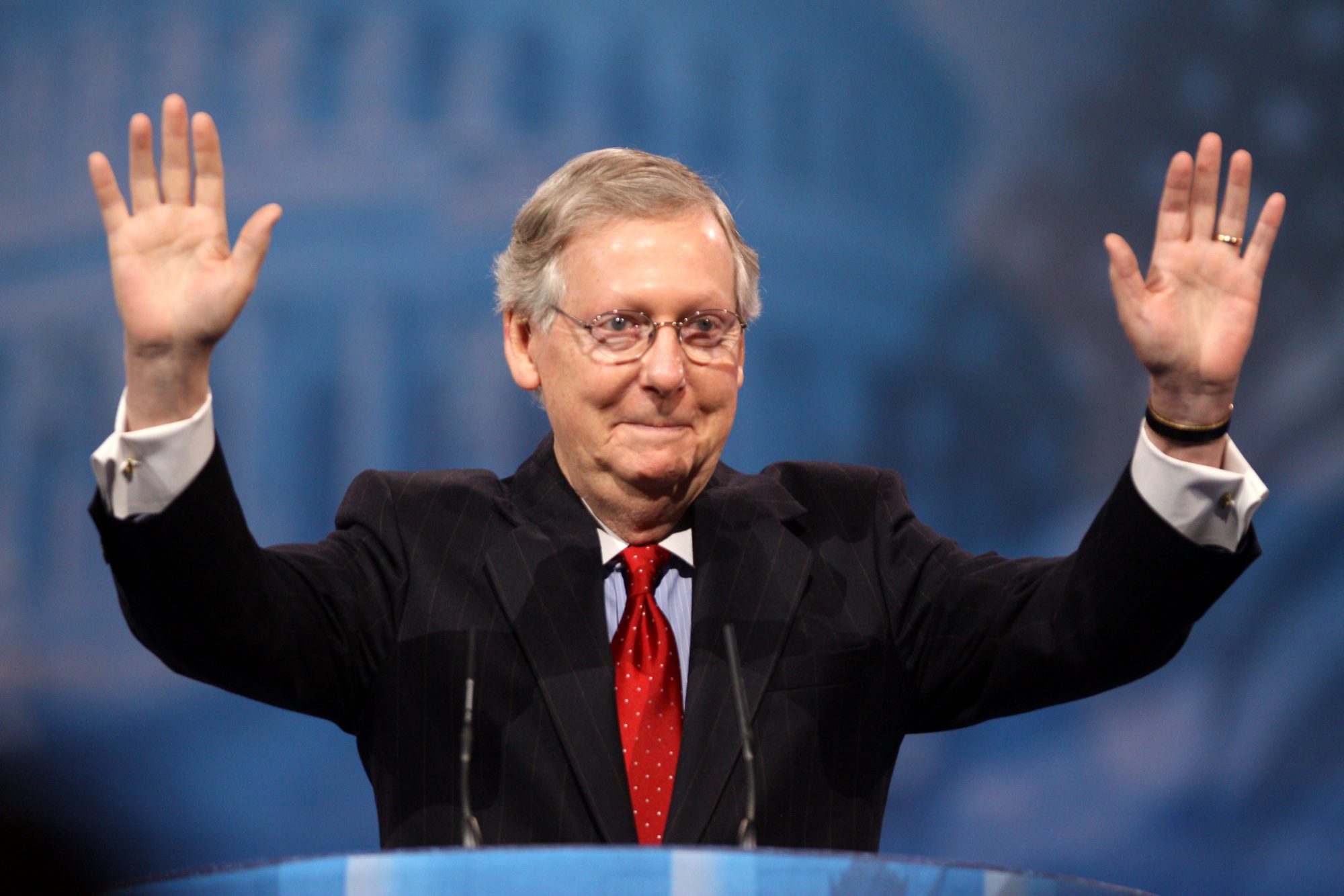 A small court in Franklin County, Kentucky, will hold a trial to decide whether the state’s new election districts are unconstitutional. The lawsuit, backed by the state Democratic Party, argues that the new maps unduly entrench Republican power by carving up urban areas.

Franklin may be a county of just over 50,000 residents, but it is also a rare Democratic-leaning jurisdiction in this conservative state and home to the state capital, Frankfort. That has long made Franklin County an inviting place for groups looking to file lawsuits against the state, giving its circuit court outsized importance when it comes to voting rights, education, labor rights, and a lot else in state politics. That has also made it a target for Kentucky Republicans.

Last year, they stripped Franklin County’s circuit court of some of its jurisdiction over statewide matters, overriding a veto by Democratic Governor Andy Beshear to get there. In 2022, they’re going after a seat on the court, where a conservative gain could further narrow one of the remaining paths for civil rights litigation in Kentucky.

One of the two judges sitting on the court, longtime incumbent Phillip Shepherd, faces a well-funded challenger this year. The race is nonpartisan, but Shepherd has long drawn Republican fire. His opponent Joe Bilby is a lawyer who describes himself as a “constitutional conservative” and who once worked as a legislative aide for U.S. Senator Mitch McConnell.

Republicans nationwide have lashed out against judges who they think are ruling against them on voting rights cases. They have passed laws across the country that weaken their powers, as they did in Kentucky last year, while also seeking to oust them at the ballot box. National conservative groups have poured money into dominating local judicial races. In the last midterm cycle, the biggest donor to the Republican State Leadership Committee by far was the dark-money Judicial Crisis Network, a group that champions a conservative judiciary.

Douglas Keith, who tracks spending in judicial elections for the Brennan Center for Justice, says conservative groups have intervened in local races for many reasons, ranging from building a bench to targeting a particular judge. But it may also be that some localities acquire far greater importance than one would expect, “like the Franklin County court which plays a special role in Kentucky.”

Attorneys have long zeroed in on Franklin County to stop civil rights violations. When the state Board of Elections moved 175,000 registered voters to an “inactive” list before the governor’s race in 2019, the court granted an injunction to block it, citing the “chilling effect on voters in the Commonwealth.” At the time, Kentuckians could file lawsuits against state officials in that county, no matter where they lived, since that is where state officials work. That’s no longer as easy today because of the Republican law adopted in 2021. Now lawsuits filed against new state laws, regulations, or executive orders must be filed in a plaintiff’s home county.

As long as a group finds a plaintiff based in Franklin County, it can still file there and have its case heard by one of its two judges—Shepherd or Thomas Wingate, who is handling the gerrymandering case. Few court systems in Kentucky fall outside of very conservative areas—Franklin is one of three counties that McConnell lost in his 2020 re-election race—and lawsuits alleging civil rights violations may receive a less friendly hearing in many other places.

Franklin County’s court can also consider cases alleging that state officials are neglecting their duties; last summer, a coalition of civil rights groups sued Beshear in Franklin County for failing to give some Kentuckians with felony convictions the information needed to restore their voting rights.

Ben Carter helped file that lawsuit as a counsel at the Kentucky Equal Justice Center. He says one main reason for filing a lawsuit in Franklin County is because judges there are already used to reining in other branches of government.

“When you have a question about the governor or the legislature, you want a judge who has been in the business of telling the executive and legislative branch what they can do,” he told Bolts. “It’s not as daunting to them. They’re in the habit of making those calls and will not give undue deference to the legislature or the governor.”

He added, “When you file in Franklin Circuit Court, you know that you are going to get one of two judges with a combined 30 years of experience making thoughtful decisions about the scope of government powers, and those are muscles that other courts have not gotten to exercise.”

As one of only two circuit court judges serving in Kentucky’s state capital for 16 years, Shepherd has heard many lawsuits against the state. In the felony disenfranchisement case, he greatly disappointed voting rights groups last fall after siding with Beshear, who had asked for the lawsuit to be tossed. But Shepherd has reined in the legislative or executive branches in other instances. In 2014, he rejected the settlement that the state had reached with a coal company that was accused of massive violations of the Clean Water Act. He ruled that the terms were too lenient on the company, and that the state’s regulations had created “incentives for inaccurate reporting” of water pollution.

Republicans won control of the state government for the first time in nearly a century in 2016, and their aggressive agenda has since repeatedly triggered lawsuits over constitutional rights or the limits of legislative power, including in recent years public health during the pandemic. In that time, Shepherd has struck down several high-profile bills as unconstitutional.

Then in 2021, Shepherd struck down several Republican laws, passed over Beshear’s veto, that limited the governor’s emergency powers in the context of COVID-19. The decision was later overturned by Kentucky’s supreme court. Also in 2021, Shepherd struck down a law that offered tax credits to fund private school tuition, ruling that this system could “exacerbate inequality in educational funding.”

These decisions put Shepherd squarely in the GOP’s crosshairs.

Republicans have cited Shepherd’s decisions and even social media habits to make the case that he is too biased to hear politically charged cases. But a 2016 analysis published by the Courier-Journal in Louisville found that the judge actually often ruled for Republicans in high-profile cases. On the campaign trail, Bilby has also attacked Shepherd for failing “to follow the law.” Shepherd defends his impartiality, recently telling the State Journal that he sees his role as “speaking truth to power when power is in the wrong.”

Neither Bilby nor Shepherd replied to requests for comment from Bolts.

Bilby’s legal endeavors have signaled a different outlook than Shepherd’s. In 2020, he represented Tabernacle Baptist Church and helped convince a federal court to rule that churches across the state didn’t have to comply with Beshear’s executive order banning mass gatherings, because it infringed their religious freedom. Around the same time, he represented a Christian school that asked the U.S. Supreme Court to allow it to reopen, despite Beshear’s order.

Several years ago, Bilby also defended a Christian organization that was receiving state funding to operate group homes for children against a lawsuit that alleged the group was pressuring the children to become Christians.

Bilby had already raised well over $90,000 by early January, a large sum for an election in a county where just about 25,000 votes were cast in the last presidential election. That’s more than any Supreme Court candidate raised in Kentucky through the state’s May 2020 primary. And it’s more than three times Shepherd’s haul so far. Shepherd ran unopposed in 2014.

Bilby’s effort to oust Shepherd comes amid broader talk by the Kentucky Republican Party to change the state’s judicial system. In a 2017 speech to the Federalist Society, Bevin suggested outright ending judicial elections. Two years later, the Senate’s Republican Majority Floor Leader Damon Thayer also proposed changing how judges are chosen. Asked if he was motivated by retaliation after Shepherd’s ruling to throw out the cuts to state pensions, Thayer said that judges “need to be reined in.”

Corey Shapiro, legal director of the ACLU of Kentucky, says lawmakers are “playing games with what should be an independent judiciary.”

He told Bolts that, with federal courts moving to the right, state courts have grown more central to fights over civil rights and the integrity of elections. “As we’re seeing federal courts become more resistant to supporting voting rights, especially with respect to partisan gerrymandering, advocates for voting rights are going to seek relief in state court,” he said.

Voting rights cases are likely to continue popping up in the lead-up to Kentucky’s 2023 governor’s race and the 2024 presidential race on matters like voter eligibility, purges, and mail-in ballots. What 2022 may decide is who will be the first judge to hear them, and whether the Republican legislature takes additional steps to insulate its decisions from courts.

Joshua Douglas, a law professor who works on election law at the University of Kentucky, says “We’re in for a brave new world of partisanship infecting Kentucky judicial races.”