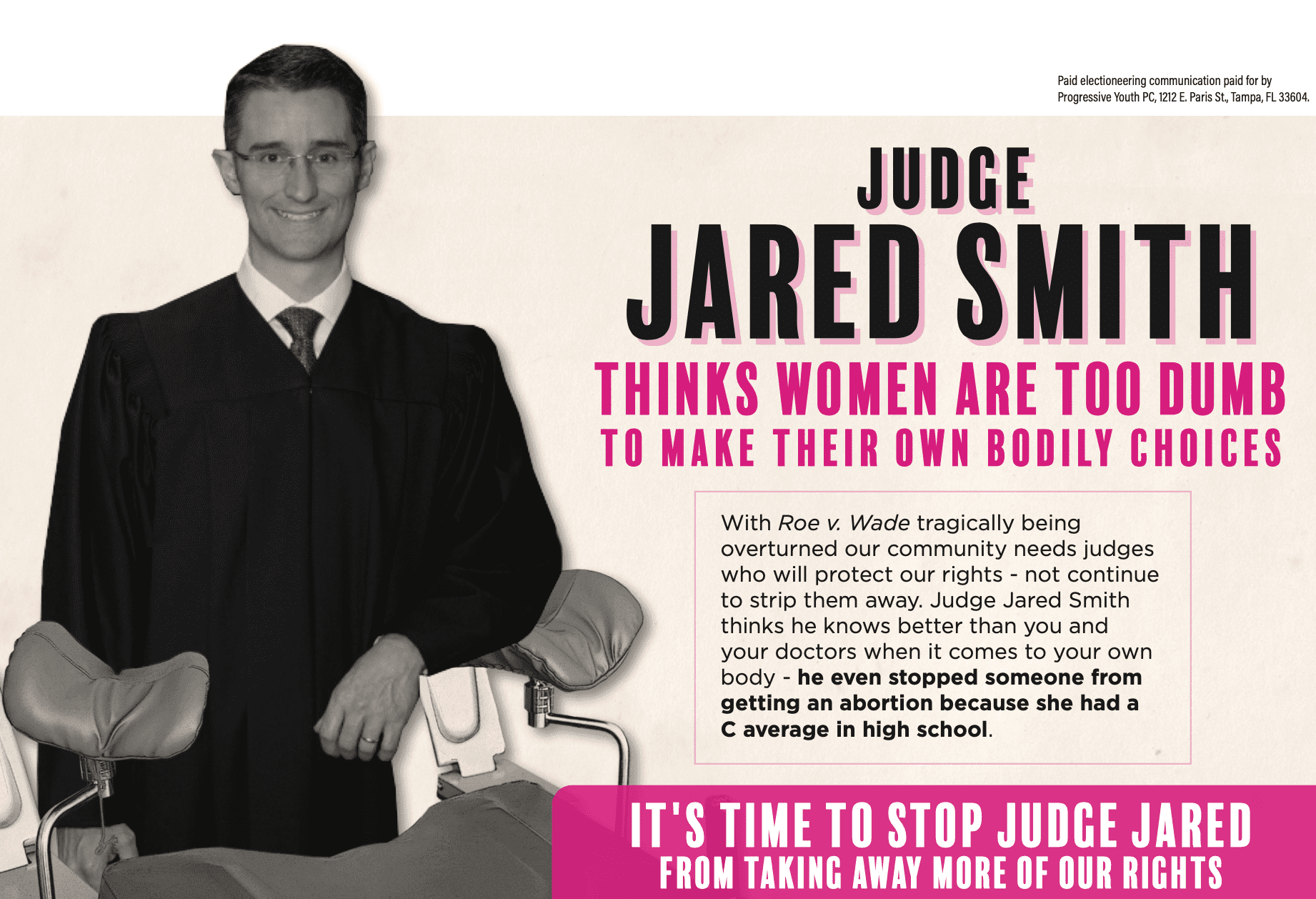 Judge Jared Smith denied a Florida teenager’s request to access an abortion without notifying her parents in January because, he said, her grades were too low. The decision against the 17-year old “Jane Doe” drew national attention, months before the Supreme Court’s Dobbs decision escalated the grave threats to reproductive rights around the country.

Smith, an appointee of Republican Governor Ron DeSantis, lost his re-election bid on Tuesday in Hillsborough County (Tampa). This blue-tilting region, long viewed as a national bellwether, was just stripped of its prosecutor by DeSantis over his defense of abortion.

After a campaign dominated by his decision in the January abortion case, Smith was ousted by Nancy Jacobs, a local attorney in private practice. Although the election was nonpartisan, vote breakdowns suggest that Smith drew support from GOP voters while Jacobs was backed by Democrats.

The campaign broke the mold of Florida’s judicial elections, where the local establishment typically rallies to easily carry incumbents across the finish line. The editorial board of the Tampa Bay Times, which backed Joe Biden in 2020, endorsed Smith as well as the other sitting circuit court judge on the ballot this week, lauding Smith for the “respect he shows litigants in his court” even as it acknowledged issues in the abortion decision. (The other incumbent judge easily won.) Even the county’s elected chief public defender, Democrat Julianne Holt, endorsed Smith, though she ultimately pulled her support as the race became contentious in the final stretch.

Further south, in Miami-Dade County, James Bush, the only Democratic lawmaker who voted for Florida’s 15-week abortion ban, was ousted in a primary by challenger Ashley Gantt. Bush, who frequently sided with Republicans, was also the only Democrat who supported the recent law against discussion of gender identity and sexual orientation in Florida classrooms.

These twin results speak to the shockwaves felt both within Democratic politics and the general electorate ever since the Supreme Court overturned federal protections for abortion in June. Also on Tuesday, Democrats unexpectedly held a congressional seat in an upstate New York district that Joe Biden narrowly carried two years ago, adding to a streak of overperformances for the party since Dobbs; some Democrats also pointed to abortion as a factor in their win over the district attorney of Tennessee’s Shelby County earlier this month.

“Abortion is a huge issue,” Fox told Bolts. “Voters are seeking out information on it, and anytime you can link that to voters’ minds in a genuine way, I think it’s going to be a winning issue.”

But Fox also stressed that those links are often obscure when it comes to the role of local officials, despite the mountain of races where abortion is on the line this year. Fox said he first made the connection to Smith’s race when he read about the judge’s January decision, but said it was hard for him to convince people to pay attention to such a downballot race. “These races are just so low information,” he told Bolts. “The chance that your life is going to be affected by a bad judge is significantly higher risk than a bad state House member or state Senator, and nobody really kind of knows what’s going on.”

Progessive Youth sent mailers to voters that hit Smith for ruling “based on his religious beliefs—not the law.” Another mailer sent by the same organization was specific to the Jane Doe case, stating, “Judge Jared Smith thinks women are too dumb to make their own bodily choices.”

Smith sought to save his job by rallying religious conservatives. “I’m a believer, I’m a judge and I’m a Christian,” he declared while campaigning in a church. Smith is also associated with a group that attacked Jacobs for having a “woke” agenda, Creative Loafing Tampa Bay reported earlier this month.

“I think the only religion that belongs in the courtroom is the rule of law,” Jacobs told Bolts on Wednesday when asked about Smith’s comments.

Smith’s decision in the January case was overturned by an appeals court that ruled he had abused his discretion in holding that “Jane Doe” was too immature to be granted a waiver from parental notification laws. But the very fact that he heard the teenager’s plea stems from restrictions Florida adopted that empower local judges to arbitrarily bestow reproductive rights upon specific teenagers, in a process known as “judicial bypass.” An investigation published by Mother Jones in 2014 documented how conservative laws combine with local anti-abortion judges in Florida to close the door for hundreds of minors every year.

Jacobs would not comment to Bolts on Smith’s decision in January beyond pointing to the appeals court ruling that faulted his reasoning. She also stressed that she would apply Florida’s laws on abortion regardless of what they may be.

Florida has not banned abortion at the moment, and for now a state supreme court precedent bars such a ban, but the state is currently implementing a 15-week ban, and the conservative supreme court could revisit its precedent. The state also has plenty of restrictions like a parental notification mandate that led to Smith’s decision in January.

Smith’s defeat also comes just weeks after DeSantis suspended the Democratic prosecutor Hillsborough County voters elected in 2016 and 2020, Andrew Warren, and replaced him with a conservative ally, Susan Lopez, who has promptly rolled back reforms put in place by her predecessor. In justifying his decision, which Warren is now challenging in court, DeSantis pointed to Warren’s public statement that he would not prosecute abortion cases.

In ousting Smith, whom DeSantis appointed to his circuit court seat in 2019, Hillsborough voters signaled their distaste for the anti-abortion policies that the governor is only escalating.

But DeSantis was more successful in other primaries on Tuesday in his quest to  reshape the state to his liking. DeSantis pushed to move local school boards to the right, endorsing and campaigning for candidates who express alarm about discussions of racism and the rights of LGBTQ students. Most of the candidates he endorsed across the state prevailing on Tuesday, including two in Miami-Dade, the state’s most populous county. Two of three school board candidates he endorsed in Hillsborough County also won.

In November, DeSantis will face Charlie Crist, a former Republican governor turned Democratic member of Congress. Crist, who supports abortion rights, cinched the Democratic nomination for governor on Tuesday. November will also decide control of the state legislature, an attorney general race that pits a Republican incumbent against  a former Democratic prosecutor who was herself targeted by a GOP governor over her reform stance, as well as the retention of five of the seven justices on Florida’s conservative Supreme Court.

Hundreds of thousands of Floridians will be barred from voting in those elections as a result of Florida’s extremely harsh felony disenfranchisement rules, including if they are too poor to pay off their court debt. DeSantis announced last week that a new elections police force set up this year was indicting people who erroneously registered to vote local Republicans in the state have already been prosecuting people for months for registering when they owed court debt, even though the state does not provide information to voters regarding their eligibility.

Still, Fox is urging Floridians to pay attention and engage with local elections, like races for judge. “One of the lessons that people learned ever since 2016 is sometimes you just gotta—nobody is coming to the rescue,” he said. “If you see something and it bothers you, sometimes you just got to do it.”